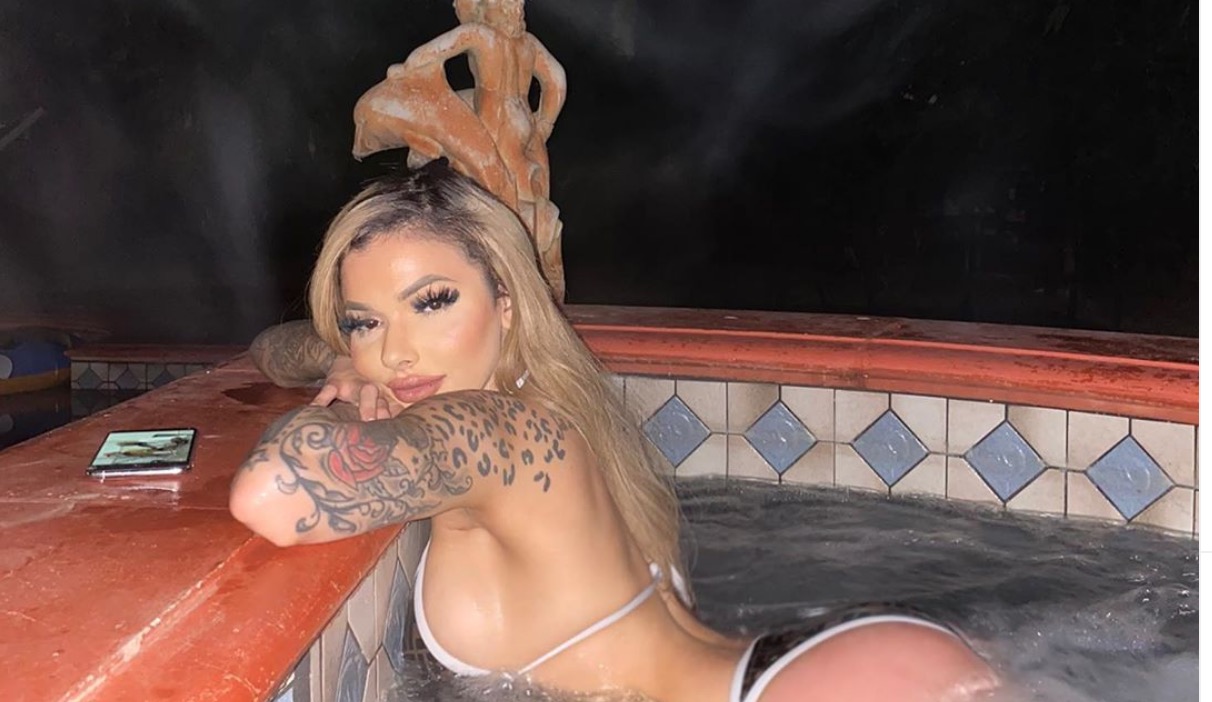 There's been a rumor going around for a while that you don't have to work hard to become famous and to be honest, Celina Powell kind of proves that the rumor is more true than a lot of people want to believe.

The young woman in the picture above has been a bit of a pain in the world of show business for a while and has been pretty proud of it.

Her fame has often been built on the backs of others, and she doesn't seem to be a good representative of her own generation, even though it's not fair to put people into groups based on how crazy or bad they act.

Who Is Celina Powell? 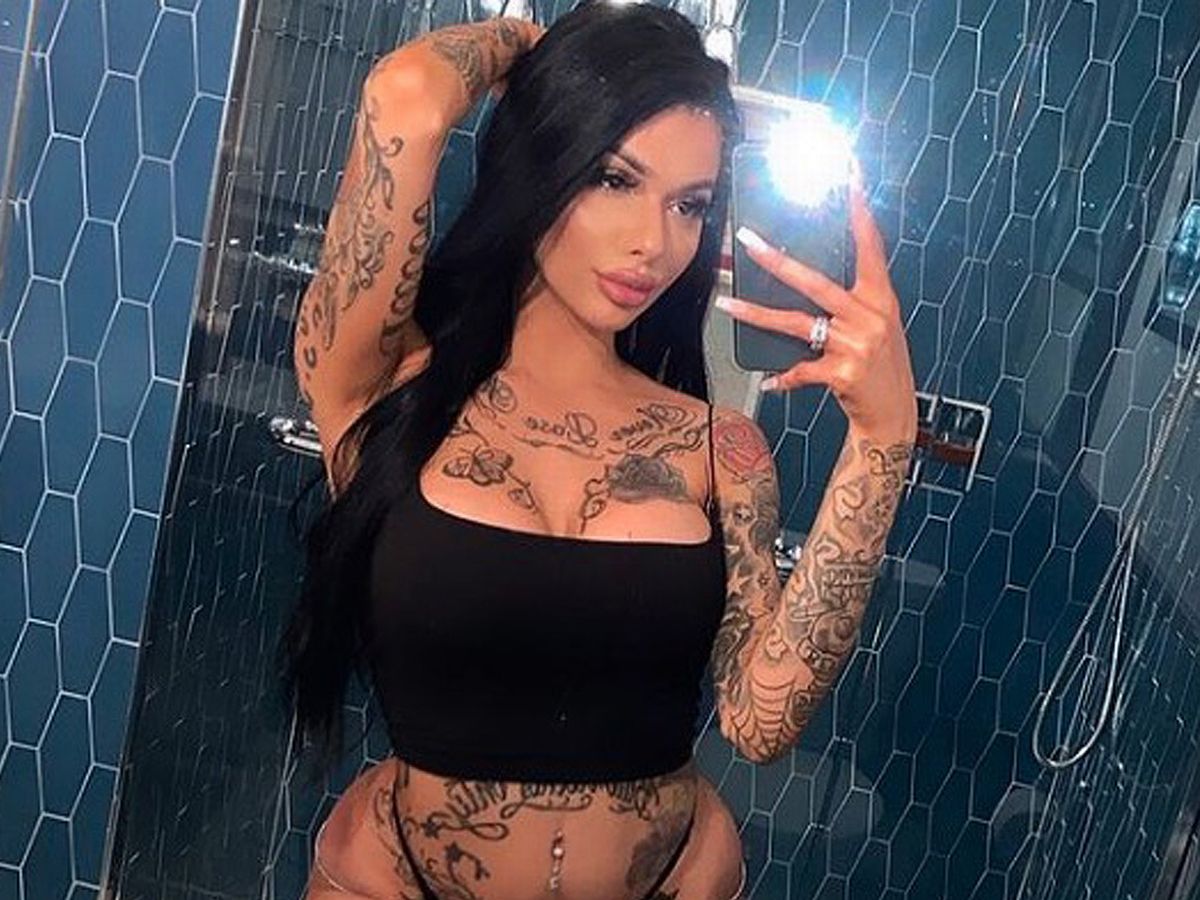 Celina Powell is a well-known socialite, as well as a model and an Instagram sensation. She is so well-known that people often refer to her as "The Black Widow."

Powell was born on June 13, 1995, in the city of Denver, Colorado, which is also the location where she spent most of her youth. It is known that she and her three siblings were raised by her aunt together.

Powell was a challenging child to raise because she lacked interest in education and actively sought out mischief throughout her childhood. In addition to this, she had a number of casual relationships, and she often dated multiple boys at the same time.

The only thing that truly excited her was the prospect of launching a career as a model and a rapper. She was quite into reading periodicals that focused on rappers and listening to music that featured them.

Celina made the conscious decision not to continue her schooling when she graduated from Wheat Ridge High school, opting instead to pursue her childhood passion of working in the modeling industry instead.

She has a significant number of followers on Instagram, and she maintains a dynamic feed by posting images of herself on a daily basis. Additionally, she has an account on OnlyFans, which allows viewers to subscribe to her channel and watch her videos.

Her most prominent claim to fame must be the several famous people with whom she has been rumored to have had romantic or sexual relationships.

In spite of the fact that the majority of her assertions are not supported by evidence, she has made several rather significant and marriage-threatening assertions.

Who Is Celina Powell Dating?

The well-known figure in the world of social media has a romantic history that is fraught with difficulty. She has a history of maintaining relationships with a wide variety of celebrities in the hip-hop business.

The following is a rundown of Celina Powell's previous romantic partnerships. Celina Powell and DJ Akademiks, a Jamaican-American entertainment figure and YouTuber, have had a romantic connection that has been on and off during the course of their careers.

Although the current situation of their romance is uncertain, DJ Akademiks may have reignited their passion by giving Powell a brand new Mercedes Benz G-Wagon in October 2020.

This is despite the fact that the current status of their relationship is unknown. Aaron Carter is a famous American rapper, singer, songwriter, actor, dancer, and record producer. Celina dated him at one point in her life.

After the Instagram celebrity posted a photo of the two of them together in the summer of 2018, the couple began dating shortly thereafter. Additionally, she has been romantically linked to Bryce Hall, an American social media star who is best known for his videos on TikTok and YouTube.

Celebrities Who Have Been Linked To Celina Powell

If you are someone who follows the world of celebrity news very closely, you have most likely become familiar with Celina Powell. As a result of her purported connections to many well-known figures in the hip-hop business, she has earned a notoriety that precedes her.

Celina Powell and Offset have been involved in a contentious dispute since since Powell made the allegation that she was expecting a child by the Migos rapper in the year 2017.

Powell maintained her stance on the claim far into 2018, during a time when Offset and Cardi B. were expecting their first child together and ultrasounds were being performed.

She even went so far as to upload a positive certainty test, which was in some way meant to demonstrate that she was not lying about anything.

It was later discovered that the woman's claim of being pregnant was an elaborate hoax, and that the pregnancy tests and ultrasounds she uploaded online did not belong to her. Since then, she has admitted that she lied; that's not cool, Powell! 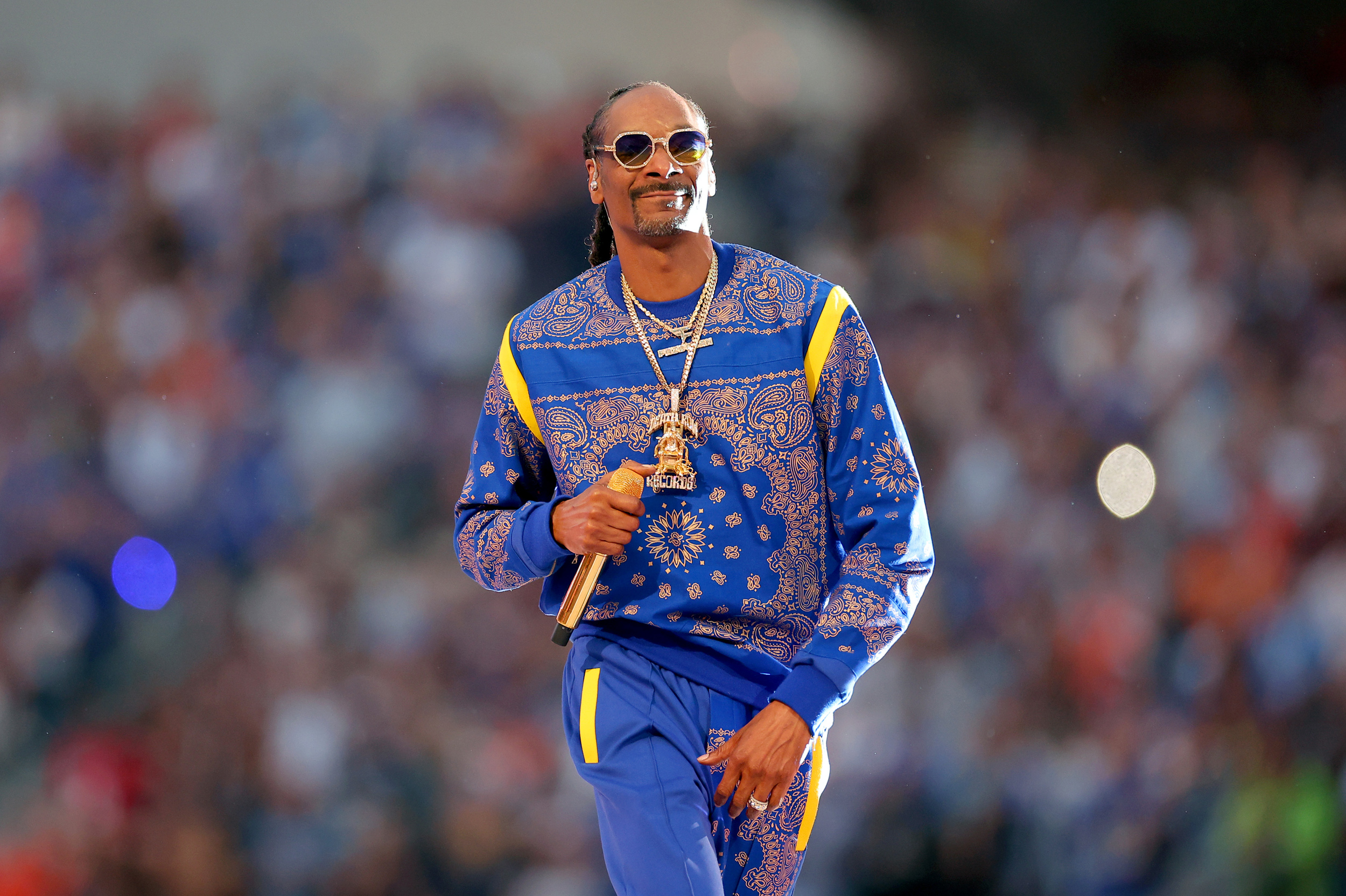 Another rapper, Snoop, is among those who have been implicated in Powell's antics. The model has uploaded a lengthy narrative to YouTube in which she describes her claimed encounter with the rapper in great detail.

Snoop has angrily denied the charges and accused the model of using his name in an attempt to gain influence in the fashion industry.

After photographs emerged online showing Tekashi and the model engaging in sexually suggestive behavior in bed together, rumors began to circulate that the two were involved in a romantic relationship.

However, it was discovered that the images that surfaced were the result of an elaborate strategy devised by the two, with the photos being staged by them and then published online. Nobody is aware of the reasons why.

Powel has made an effort to stoke the flames of speculation about his connection to Drake. In the beginning of January 2021, she disclosed some text messages that she had exchanged with Drake.

Based on the texts that Drake had sent, it was clear that he had no interest in whatever Powell was selling. The rapper reveals in one text message that he is aware of who she is and that he does not want any portions!

Over the course of their careers, Celina Powell and DJ Akademics have had a relationship that has been on-and-off. It is not known what the status of their relationship is at the moment.

On the other hand, the DJ surprised Powell by giving him a brand new Mercedes-Benz G-Wagon! 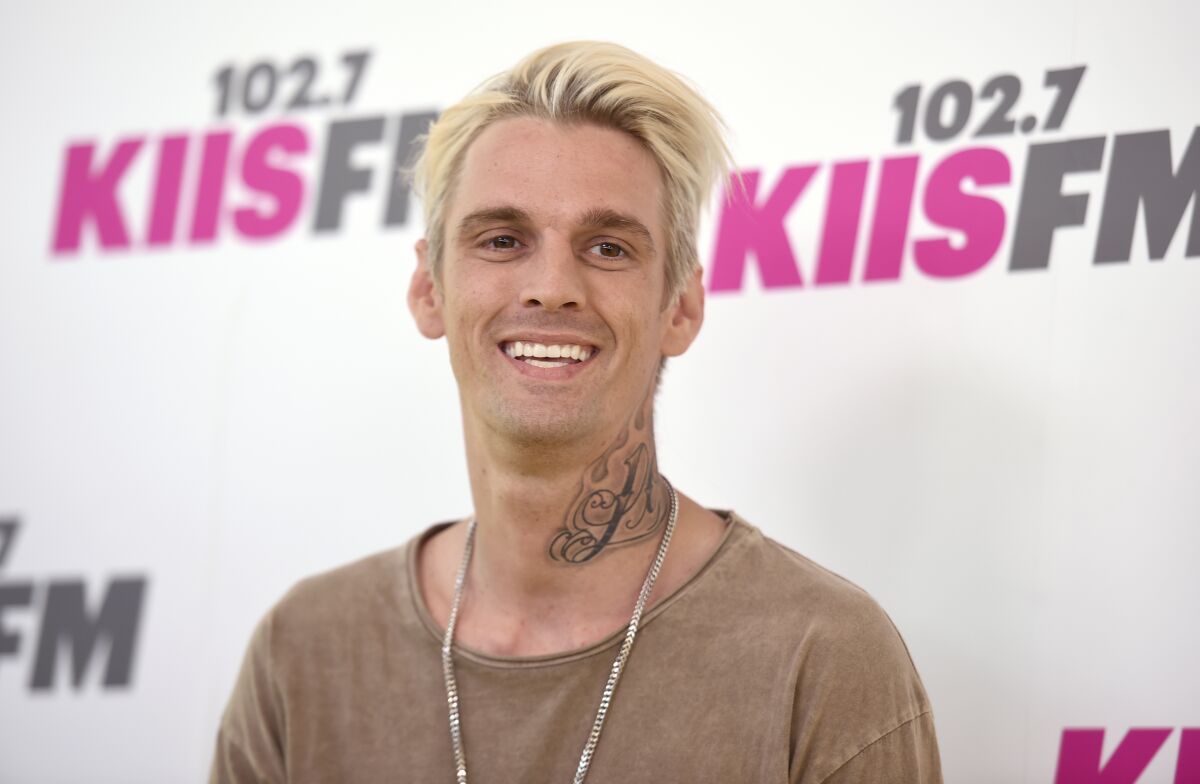 Yap! Even Aaron Carter is included on this list of players. Powell shared on Instagram in the summer of 2018 a photo of herself and Aaron Carter looking quite comfy and in love.

If it weren't for her caption, perhaps we'd let it slide, but seeing as how she said, "All smiles when with you my love," we can breathe a sigh of relief and say that it's okay.

A spokesman for Carter, on the other hand, disclosed that the actor was not in a relationship and was holding out for the ideal partner which was most certainly not Powell.

During one of the Instagram Livestream sessions that Celina had with her friend Aliza, Bryce Hall was mentioned in passing by Celina at one point.

She claims that she has a great deal of information on him, which can only suggest that there is a backstory to it. Sad to say, it appears that even the younger ones have not been spared.

It's possible that Celina Powell is famous, but not for the reasons she should be. Having said that, she is a fully developed adult who is capable of making her own choices regarding her life. Simply said, we are just interested in the drama.

why I really went to prison| life update :)

Celina Powell is in jail. TMZ says that the well-known social media star got two years in prison Wednesday because she broke the rules of her probation.

Powell is best known for making accusations against some of the biggest names in hip-hop. In 2015, she was arrested on charges that she drove a getaway car for thieves.

Prosecutors say Powell has continued to break the terms of her probation by not taking drug and alcohol tests or doing other things that were ordered by the court. TMZ says Powell was finally arrested when she didn't show up for a court date a month ago.

She will serve her time in a Colorado state prison and will be able to get out sometime in December, according to reports. A few years ago, Cardi B also went after Powell after she said on social media that Offset paid her $50,000 to have an abortion.

The rapper from "Invasion of Privacy" posted a screenshot of old news articles in which Powell was said to have admitted to lying about the pregnancy rumors about Offset.

Celina Powell is a well-known socialite and Instagram star who is known for her very sexy photos and dramatic posts. She got a lot of attention when she said some controversial things about Snoop Dogg and other big names in hip hop.

What School Did Celina Powell Go To?

Where Is Celina Powell Now?

Celina Powell is in prison. Powell was arrested by Miami-Dade police in March 2021 for making an illegal right turn.

This happened in Miami, Florida. She got away with that offense with just a warning, but when the police found out she was driving with a suspended license, they took her into custody.

So, she was charged with driving often with a license that was revoked and taken to a local jail. Powell's next parole hearing is set for December, and she will be able to get out of jail for the first time on March 24, 2023. The Denver Women's Correctional Facility is where she is being kept.

American Instagrammer Celina Powell is known as one of the most controversial people on the site. But Celina's many high-profile flings are not the most interesting thing about her public life. Instead, it's how the Denver socialite enjoys making a meal out of all the alleged sexual encounters she has had in the past.

Celina Powell doesn't hesitate to talk about how rude she has been to famous people. She is also brave enough to fake being pregnant, which may be a sneaky way for her to get her ex-boyfriends to pay for child custody.