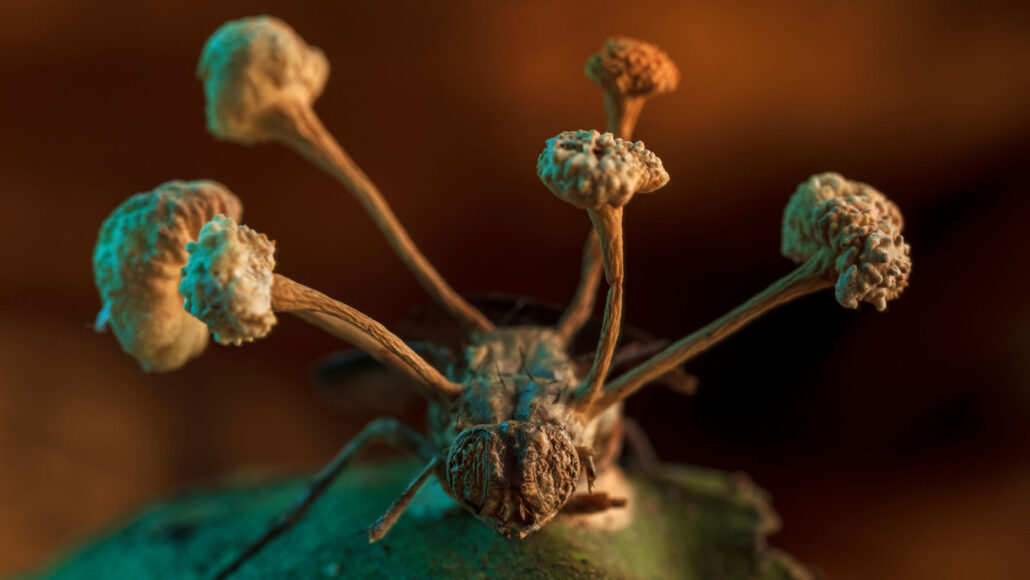 The discovery of a fly with zombie fungus wins a science photo contest.

This zombie fungus that can control the mind of an insect may not be something to cheer about, but a picture of it killing an insect is getting cheers from scientists.

The photo is so beautiful that it won the second BMC Ecology and Evolution Image Competition.

It beat out a number of other nature photos that were also very interesting.

It captures the fruiting bodies of a parasitic fungus that grows out of an infected fly's dead body in the Peruvian rainforest.

The fungus-covered fly was one of many pictures sent in to the contest from all over the world.

The pictures were meant to show the beauty and challenges of the natural world.

On August 18, the journal announced who had won.

The shot that ended up being selected as the winner was taken by Roberto Garca-Roa, a conservation photographer and evolutionary biologist who works at the University of Valencia in Spain.

He captured the picture while he was in the Tambopata National Reserve, a protected region in the Amazon.

The fungus coming out of the fly is from the genus Ophiocordyceps, which is a group of parasitic fungi called "zombie fungi" because they can infect insects and take control of their minds.

“There is still much to unravel about the diversity of these fungi as it is likely that each insect species infected succumbs to its own, specialized fungus,” says Charissa de Bekker, an expert in parasitic fungi at Utrecht University in the Netherlands.

The fungal spores initially settle on the doomed fly.

And so begins the deceptive climax.

The spores invade the fly's exoskeleton, infect the body, and take over the fly's brain.

After taking charge, the fungus uses its newfound mobility to go to an area with optimal conditions for its own growth, such as warmer, darker, and wetter surroundings.

They wait it out until the fly dies and the fungus may feast on its corpse.

The fly's digestive system gives way to a fruiting body, which releases spores into the air to find another hapless host and continue the macabre cycle.

It is a “conquest shaped by thousands of years of evolution,” García-Roa said in a statement announcing the winners.

De Bekker claims that investigation into the molecular mechanisms of fungal mind control is underway, even in her own lab.

“These fungi harbor all sorts of bioactive chemicals that we have yet to characterize and that could have novel medicinal and pest control applications.”

“Roberto García-Roa’s striking image is like something out of science fiction. It illustrates both life and death simultaneously as the death of the fly gives life to the fungus,” adds senior editorial board member Christy Anna Hipsley, who recommended the entry.

“Here, they await death, at which point the fungus feeds on its host to produce fruiting bodies full of spores that will be jettisoned to infect more victims.”

The judges also chose winners and runners-up in four other categories: Relationships in Nature, Biodiversity Under Threat, Life Close Up, and Research in Action.

The winning photos, according to the journal's editors, show the interconnectedness of life on Earth, its exquisite detail, and the difficulties it faces.