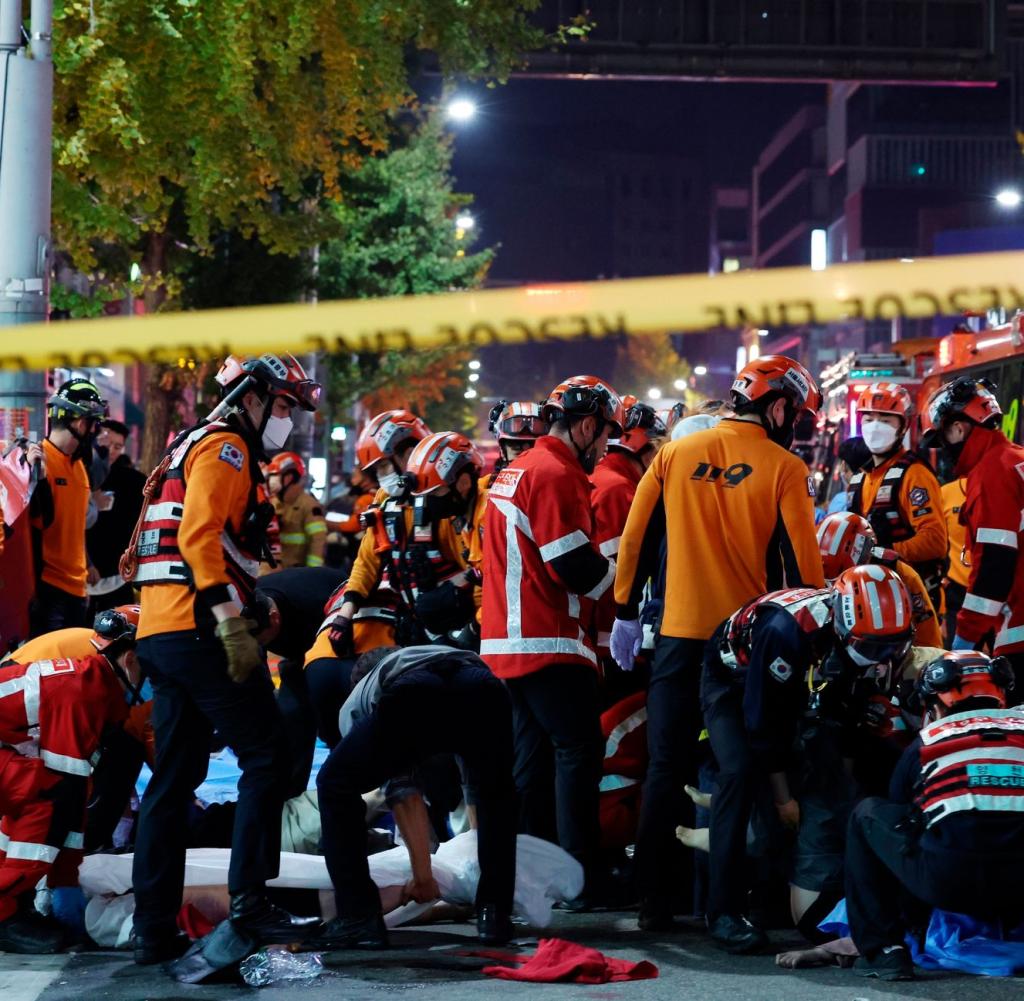 A mass of mostly young people celebrating Halloween became trapped as the crowd surged into a narrow alley where hundreds of people were killed and injured in a stampede in Seoul. People who had been crushed in the capital's Itaewon entertainment district on Saturday night were given CPR by emergency workers and bystanders.

Choi Seong-beom, chief of the Yongsan fire department in Seoul, said that most of the people killed or hurt were teenagers and people in their 20s. The Ministry of the Interior said that at least some of the dead were foreigners, but they didn't say what country they were from right away. The number of people who died could go up because some of those who were hurt were in very bad shape.

In a statement on Sunday, the State Department said that at least two Americans were killed in the crowd. Officials said at first that 150 people were hurt as of Sunday morning, but later changed that number.

Officials from the National Fire Agency didn't say right away why the number was lowered, but they did say that rescue workers would have had a better idea of how many people were hurt as they worked, and that some of the injured would have been counted as dead. It was also possible that some of the people who had only minor injuries had gone home and were no longer counted because they were no longer there.

There were about 100,000 people in Itaewon for the biggest outdoor Halloween party in the country since the pandemic started. In the past few months, COVID-19 restrictions were eased by the South Korean government.

Itaewon is an expat-friendly neighborhood with trendy bars, clubs, and restaurants. It is close to where the headquarters of U.S. military forces in South Korea used to be before they moved out of the capital in 2018.

More than 1,700 people from all over the country, including 520 firefighters, 1,100 police officers, and 70 government workers, were sent to the streets to help the hurt. In a separate statement, the National Fire Agency said that officials were still trying to figure out the exact number of people who needed emergency care.

It wasn't clear right away why so many people rushed into the narrow downhill alley near the Hamilton Hotel, which is a popular place for parties in Seoul. One survivor said that after being pushed, many people fell and fell on top of each other "like dominoes."

The Hankyoreh newspaper in Seoul said that the only survivor, whose last name was Kim, said that they were trapped for about an hour and a half before they were rescued. During that time, some people yelled "Help me!" and others were out of breath.

The newspaper quotes another survivor, Lee Chang-kyu, as saying that he saw five or six men start pushing other people before one or two people fell. This was the start of the stampede.

South Korean President Yoon Suk Yeol said in a statement that people who were hurt should be treated quickly and that the safety of the celebration sites should be looked at. He also told the Health Ministry to send out disaster medical assistance teams as soon as possible and make sure there are beds for the injured in nearby hospitals.

People in the area were told by emergency text messages from the Seoul Metropolitan Government to get back home quickly.

Jill and I send our deepest condolences to the families who lost loved ones in Seoul, We grieve with the people of the Republic of Korea and send our best wishes for a quick recovery to all those who were injured. The Alliance between our two countries has never been more vibrant or more vital - and the ties between our people are stronger than ever. The United States stands with the Republic of Korea during this tragic time.

- President of The United States Of America Joe Biden

In South Korea, there have been stampedes that killed people in the past. In 2005, a crowd crush at a pop concert in the southern city of Sangju killed 11 people and hurt about 60 more. In 1992, a teenage girl died and dozens of other people were hurt when there was a stampede at a New Kids on the Block concert in Seoul.