Interior Ministry Officials From Ukraine Were Killed In A Helicopter Crash 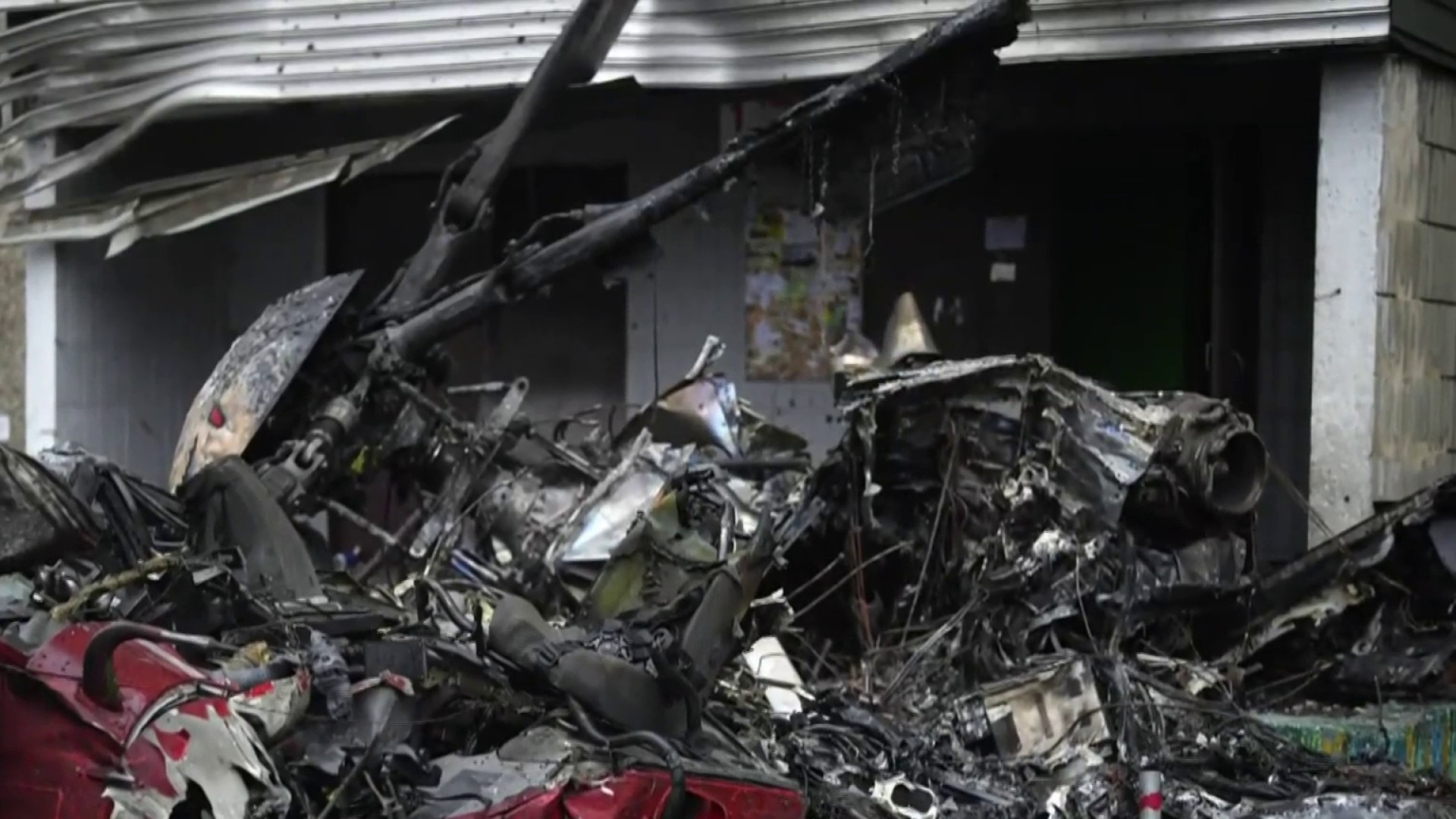 Interior ministry officials from Ukraine were killed in a helicopter crash when their helicopter crashed near a kindergarten in an east Kyiv suburb. Along with his first deputy minister and state secretary, Interior Minister Denys Monastyrsky, who was 42, also died.

Authorities say that one of the 14 people who died when the helicopter crashed in Brovary at 6:30 a.m. local time (8:30 a.m. GMT) was a child. There is no evidence that the crash was anything but a mistake.

But the SBU said it was looking into several possible reasons for the crash, including sabotage, a technical problem, or a violation of flight rules. The helicopter crashed near a kindergarten, which was badly damaged and filled with smoke.

Before, the State Emergency Service said that up to 18 people had died in the crash. Later, they changed the number of deaths to 14. Mr. Monastyrsky, who was one of President Volodymyr Zelensky's political advisers for the longest time, is the most well-known Ukrainian who has died in the war since it started.

Kyrylo Tymoshenko, who is the deputy head of the Ukrainian president's office, said that the minister was on his way to a "hot spot" in a war when his helicopter crashed. Volodymyr Tymoshko, the head of police in the city of Kharkiv in the northeast of Ukraine, said that the ministerial team was on its way to meet him there and that he had just talked to them yesterday.

The death of the minister hurts the government in Kyiv deeply because the interior ministry is in charge of keeping the peace and running the police during the war.

President Zelensky asked leaders at the World Economic Forum in Davos, Switzerland, to hold a moment of silence for the people who died in the helicopter crash. He did this through a video link saying:

There are no accidents at war time. These are all war results absolutely.

The president of Ukraine also said that he did not worry about his own safety. After Mr. Monastyrsky died, Ihor Klymenko, who was in charge of the national police force in Ukraine, was named acting interior minister. People in Kyiv who saw what happened said that Russia's war was to blame.

There are risks to flying important people through Ukraine by helicopter at tree level. The only parts of the helicopter that could be found were a door panel and a rotor that landed on the roof of a car. Next to it were three bodies that were wrapped in foil.

The interior minister, who was 42 years old, was one of the most important people in President Zelensky's cabinet. During the war, he was a well-known face to Ukrainians because he told them about deaths caused by Russian missile strikes since February 2022, when Russia invaded Ukraine.

Officials from Ukraine said that there were three crew members and six people from the ministry on board the helicopter. Yevhen Yenin, who was the first deputy minister, and Yuriy Lubkovych, whose job it was to organize the work of the ministry, both died. Before he became the minister of the interior, Mr. Yenin helped the government of Ukraine represent itself abroad.

US President Joe Biden said he was sorry for everyone who died in the crash. Mr. Tymoshenko said that the loss of the leaders of the Interior Ministry would not affect its work, but his government colleagues were visibly shocked as they reacted on national TV.

Mariia Mezentseva, an MP and friend of the late minister, said it was a tragedy for everyone because the ministry played a big part in how Ukraine responded to the invasion.

He responded 24/7 to his colleagues, friends and family. He was very close to President Zelensky from day one of his presidential campaign.

- Mariia Mezentseva, an MP and friend of the late minister

Mr. Klymenko, the head of the national police, said on Facebook that the helicopter belonged to Ukraine's state emergency service. Other officials said it looked like a French Super Puma aircraft. 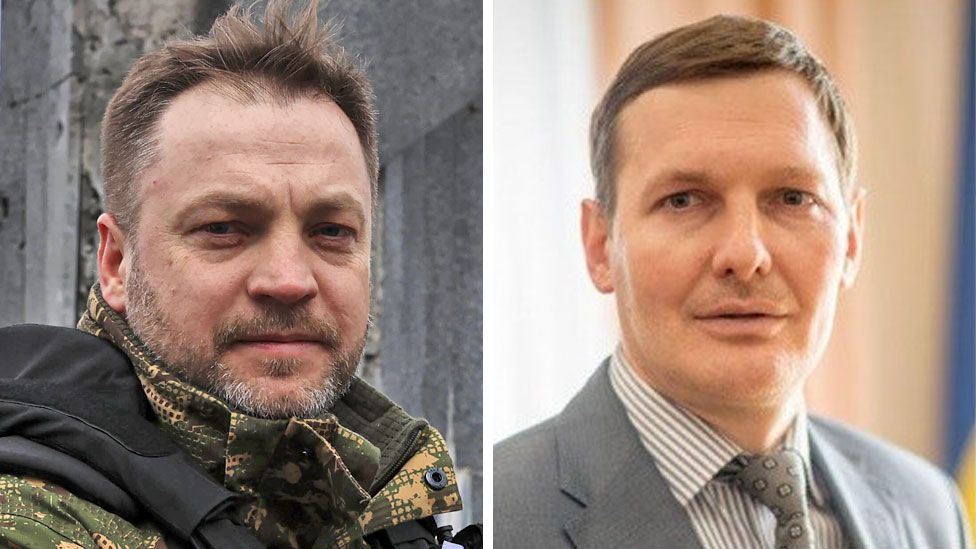 Two of the ministry leadership who died in the crash

When the helicopter landed, parents were taking their kids to school. "The pain is unspeakable," the president said. "The helicopter fell on the territory of one of the kindergartens."

One woman in the area told the BBC that as the helicopter flew over her house, she saw a terrible flash. She said it was clear that the pilot was trying to avoid her 10-story apartment building because he went down closer to the smaller building.

"Parents were running, screaming. There was panic," said local volunteer Lidiya. As the fire spread through the building, residents and emergency workers rushed to get the kids out.

Dmytro, a local, said that he jumped over a fence to help kids get out. One of the girls he picked up was named Polina, but when her father came in calling her name, her face was covered in blood, so he didn't recognize her.

An assistant to Mr. Monastyrskyi named Tetiana Shutiak also died in the crash. Anton Herashchenko, a representative for the ministry of the interior, said that the three men were friends and leaders who had worked to make Ukraine stronger.

We will always remember you. Your families will be cared for.

- Anton Herashchenko, a representative for the ministry of the interior

Ms. Mezentseva said that when she first heard about the disaster, she thought it was a hoax.

Just four days ago, 45 civilians were killed in an attack on Ukraine that was one of the worst since the war began. In the central city of Dnipro, a Russian missile hit an apartment building, killing 45 people, including six children.

Ukraine has asked the West to help it prepare for a new Russian offensive by sending tanks. When Western allies talk about the war at the Ramstein air base in Germany later this week, a choice is likely to be made.