Mystery Object – It Puzzled Scientists By Disappearing A Giant Star 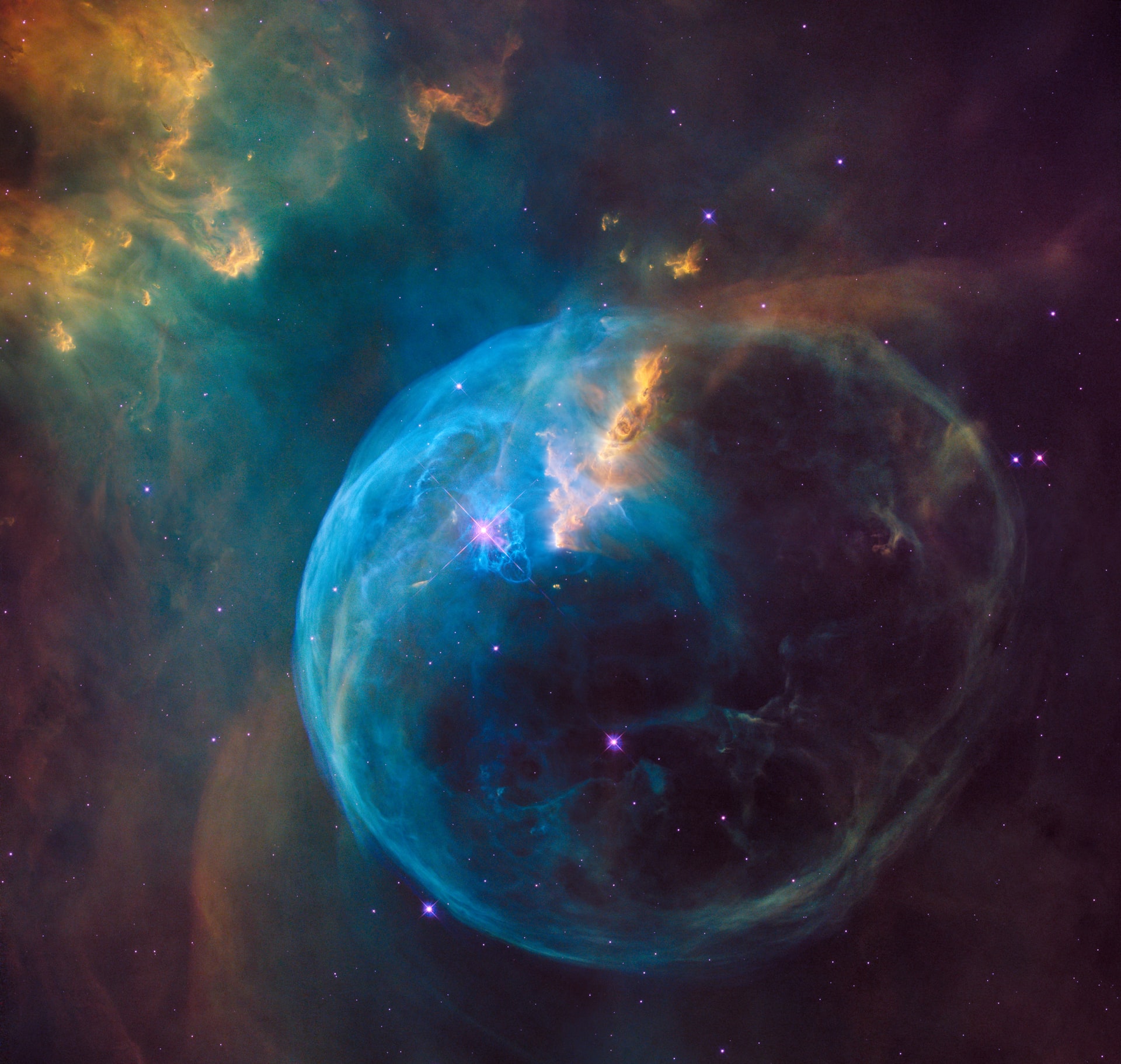 The disappearance of a distant, big star for almost 200 days caught scientists puzzled, as they had not seen such disappearances before, according to National Geographic.

After about a decade of investigating various causes, scientists still don't know what's the mystery object that is blocking off almost all of the star's light.

Some of the remaining hypotheses, detailed in recent research published in the Monthly Notices of the Royal Astronomical Society, depend on as-yet-unobserved events such as a dark disk of material circling a nearby black hole or unknown, dust-enshrouded partner stars.

A team's task was made more complicated because, in 17 years of monitoring, the star only went dark once, in 2012.

The Milky Way galaxy, which contains our solar system, is filled with strange and fascinating phenomena.

Take the almost one thousand mysterious filaments or threads in the Milky Way's core, which were discovered last week.

Many of them stretch for more than 150 meters.

In late January of 2022, scientists discovered yet another unidentified celestial body; this one was described as more starlike than previous ones but still wholly unprecedented.

The light on this one goes out for almost 18 minutes before returning for another minute.

This kind of object is known as a transient in the astronomical community.

This one points toward Norma, a constellation visible in the southern hemisphere.

It's unclear what it is, but roughly three times an hour, it becomes one of the brightest radio emitters in our sky by sending out a beam of radio waves that spans Earth.

They shine brightly for a few days but then fade away.

For instance, a supernova is a slow transient.

Similarly, rapid transients may result from the destruction of other stars.

It's possible to see pulsars, a kind of neutron star, blink on and off because they emit a beam.

However, a pulsar's flash lasts only a few milliseconds or seconds.

This new object's brightness cycle may thus seem to be anywhere in the middle, between sluggish and quick.

The new object's blink rate is not measured in days or seconds but minutes.

And this is something novel.

Researchers from the International Center for Radio Astronomy analyzed it.

On January 26th, their findings were published in the prestigious magazine Nature.

What Is Mystery Object?

Everything in space is constantly whirling.

This new object must be rotating in space, as we detect a beam of some radio waves as it moves over the face of the Earth.

Scientists think that this object rotates in minutes. If so, why?

The scientific crew has some ideas on what the mystery object may be.

They think it's like a star's core that's been crushed to the ground.

Neutron stars and white dwarfs are two of the many possible fates for stellar remnants.

The strange new object seems to have a very powerful magnetic field, which might be a clue.

This very luminous object is far less massive than our sun, and its radio waves are strongly polarized.

The polarization of radio waves provides evidence for a powerful magnetic field.

This hypothetical neutron star spins very slowly and was expected to exist.

But no one anticipated seeing one like this with the naked eye since we didn't think they'd be quite that luminous.

Magnetic energy is being converted into radio waves at an unprecedented rate.

An very long-period magnetar was the official label.

After appearing in the astronomer's data for a brief three months, the mysterious object suddenly vanished.

The astronomers are waiting for it to resurface and looking for similar objects in the meantime.

If astronomers make further discoveries, they will learn if this was a once-in-a-lifetime occurrence or the beginning of the discovery of a massive new population.

The Square Kilometre Array (SKA) radio telescope is anticipated to begin operations within the next decade, much to astronomers' excitement.

As the biggest radio telescope ever built, it will help astronomers better understand some of the universe's most baffling mysteries.

Visual illustration of planets in outer space with satellites and meteors

There are many strange stars in the galaxy, and many have natural luminosity variations.

In 2019, one of these variable stars, Betelgeuse, rapidly darkened, leading some to fear that it would soon explode.

That didn't happen. As an alternative, the red supergiant near Orion's shoulder brightened to its previous levels.

Scientists believe that dust and a cold area in Betelgeuse's southern hemisphere are to blame for the star's drastic dimming.

Astronomers speculated in 2015 that an extraterrestrial megastructure in orbit was obscuring Tabby's Star.

Alien technology was a significant factor in the star's meteoric fame.

A monster 100 times the size of our sun, yet burning at lower temperatures, was eight billion years old.

In subsequent studies, data from the European Space Agency's Gaia satellite and ground-based surveys were utilized to learn more about the star.

It was becoming more and more challenging to determine how far away it was, and its trajectory across space seemed strange.

The University of Washington's Emily Levesque focused on massive star research and was part of the current study.

Explanation Of The Mystery Object

Smith and his coworkers were stumped by the star's peculiar behavior and set out to find an explanation.

Variations in luminosity caused by pulsations or spasms inside the star were studied, and this kind of activity is typical, but not seen to any great extent in stars like VVV-WIT-08.

The scientists also discounted the possibility that the eclipse was caused by coincidence with a nearby, dark, foreground object like a dusty, faint star.

we'd need a massive number of these black floating things. The possibility of it happening is low, since we should have seen many more instances like that in the area.

Whatever obscured VVV-WIT-08 is probably gravitationally connected to the star, an idea supported by Wright and others.

And if that is the case, the scientists argue that a vast ring of dusty debris around a companion star in orbit would be the best explanation.

These kinds of systems actually occur, with the most famous example being Epsilon Aurigae, where every 27 years a supergiant star gets overshadowed in part by a giant, dust-enshrouded partner.

However, dust acts as a filter for light, enabling longer, redder wavelengths to get through, which is not what we see in our measurements.

And debris disks often tail out gradually rather than ending abruptly, but Wright notes that Saturn's tiny moonlets shave clean holes into the rings.

What type of companion object VV-WIT-08 could have in orbit is similarly unclear.

Disks that generally develop around main sequence stars and massive stellar corpses like white dwarfs were explored, but they could not provide a sufficient explanation for the data.

Astronomers believe should exist but have never witnessed, an orbiting black hole encircled by a dark, dense debris ring is another possible explanation.

One other possibility is that an orbiting companion is clearing the star's path of dust, but this wouldn't account for all of the data.

Nevertheless, Levesque argues that it is reasonable to concentrate on dust in the system since scientists anticipate that large, developing stars would lose material that ends up in orbit, even if future systems don't look precisely like this one.

It's delightfully not too strange; it's the type of thing that you would anticipate,

However, "dust does not appear this clean," therefore such an order would suggest a very uncommon distribution pattern.

And although it's natural to speculate that an alien megastructure may have passed in front of the star, Wright believes that theory isn't ready for prime time just yet.

Something Large Made a Giant Star Disappear for 200 Days

What Is The Most Massive Object In Our Galaxy?

The Hercules-Corona Borealis Great Wall is a supercluster of galaxies and the largest known object in the cosmos.

It takes light to travel over the structure for around 10 billion years.

What Is The Unknown Object In Space?

The object was found around 4,000 light-years distant, so it may be said to be in "our galactic backyard."

A new tab or window will appear.

Researchers claim that astronomers are familiar with "transients," or things that appear and disappear throughout the cosmos.

What Object Is In The Galaxy?

Many are likely to contain significant amounts of dark matter that we cannot see.

Most people think that most of the space between galaxies is empty, which makes each galaxy something like a cosmic sanctuary.

What Is The Spinning Object In The Milky Way?

Australian researchers claim to have found something unprecedented in the Milky Way: a mysterious spinning object.

If it is a magnetar, this is how it may seem in an artist's rendering.

Astronomers have found a new mystery object; it produces strong radio waves three times each hour for around a minute.

Whatever it was that caused the eclipse of the faraway star must have been enormous.

It looked to have a sharp edge and was opaque, blotting off most of the night sky's brightness.