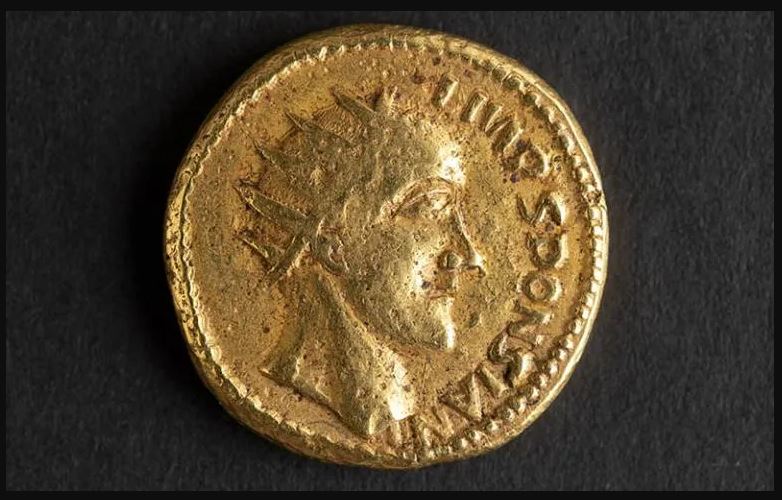 Scientists say that an old gold coin proves that a Roman emperor from the third century who has been written out of history as a fictional character really did live.

The coin with the name and picture of Sponsian was found in Transylvania, which was once a far-flung part of the Roman empire, more than 300 years ago.

It had been kept in a museum cupboard because people thought it was a fake.

The Proof Of The Roman Emperor

When the gold coin was first discovered in 1713, experts confirmed its authenticity. However, many individuals in the mid-19th century thought the currency was a fake due to its poor design.

In 1863, a French coin expert concluded the coin was fake. When Professor Paul Pearson from University College London saw coin images, he suspected the conclusion was wrong. Scientists now believe the currency was in circulation 2,000 years ago based on microscopic scratch traces.

Professor Paul Pearson said that the investigation's conclusions shocked him.

What we have found is an emperor. He was a figure thought to have been a fake and written off by the experts. But we think he was real and that he had a role in history.

More On How It Was Proven

In 1713, a small coin trove yielded the story's centerpiece. It was believed to be actual Roman coinage until the middle of the 19th century, when experts began to suspect that it was forgery due to its crude appearance.

Henry Cohen, a leading coin scholar at the Bibliothèque Nationale de France, considered it for his large Roman coin catalogue in 1863, solving the problem. He called them "modern" forgeries, poorly made, and "ridiculously imagined." Other specialists agreed, and Sponsian is not mentioned in scholarly catalogues.

While researching a book on Roman history, Professor Pearson viewed photos of the coin and suspected something was wrong. He saw blemishes on its surface that he assumed were from the coin's long circulation.

Their findings were revealed in the journal PLOS1 after examining all four coins with a microscope. They observed that the coins had scratches and that their patterns matched handbag jingling. A chemical analysis by the museum's coin curator, Jesper Ericsson, and Professor Pearson showed that the coins had been buried in soil for hundreds of years.

The Question Of Who Sponsian Is

He may have been a military leader forced to become emperor of Dacia, the most remote and toughest province of the Roman empire, according to researchers.

Archaeological study shows that Dacia became separated from the Roman empire around 260 AD. An epidemic and civil conflict tore the empire apart.

Jesper Ericsson believes Sponsian led Dacia's troops and civilian population through a civil war until 271–275 AD when the province was abandoned and was besieged and isolated from Rome.

Our interpretation is that he was in charge to maintain control of the military and of the civilian population because they were surrounded and completely cut off. In order to create a functioning economy in the province they decided to mint their own coins.

- Jesper Ericsson, the coin curator of the Hunterian Museum at Glasgow University

Who Was The Greatest Roman Emperor?

Gaius Octavius Thurinus, who was also called Octavian or "Augustus," was the first official emperor of the Roman Empire. Many historians think he was the best.

Who Was The Last Greatest Roman Emperor?

A look at the life of Rome's last great emperor, leader, and stoic. In the second century AD, Marcus Aurelius was the last of five emperors who were known to have ruled Rome with authority, kindness, and skill.

Who Defeated The Roman Emperor?

Romulus Augustulus, the last Roman emperor of the West, was deposed by the German chieftain Odoacer in 476. This was the last step in the fall of Rome. During the Middle Ages in Europe, the Byzantine Empire kept the East richer and stronger than the rest of Europe.

Once the researchers knew the coins were real and that they had found what they thought was a lost Roman emperor, they told researchers at the Brukenthal Museum in Sibiu, Transylvania, which also has a coin from the Sponsian period. It was part of Baron Samuel von Brukenthal's will.

He was the governor of Transylvania for the Habsburgs. The Baron was looking at the coin when he died, and the story goes that the last thing he did was write the word "genuine" on a piece of paper.