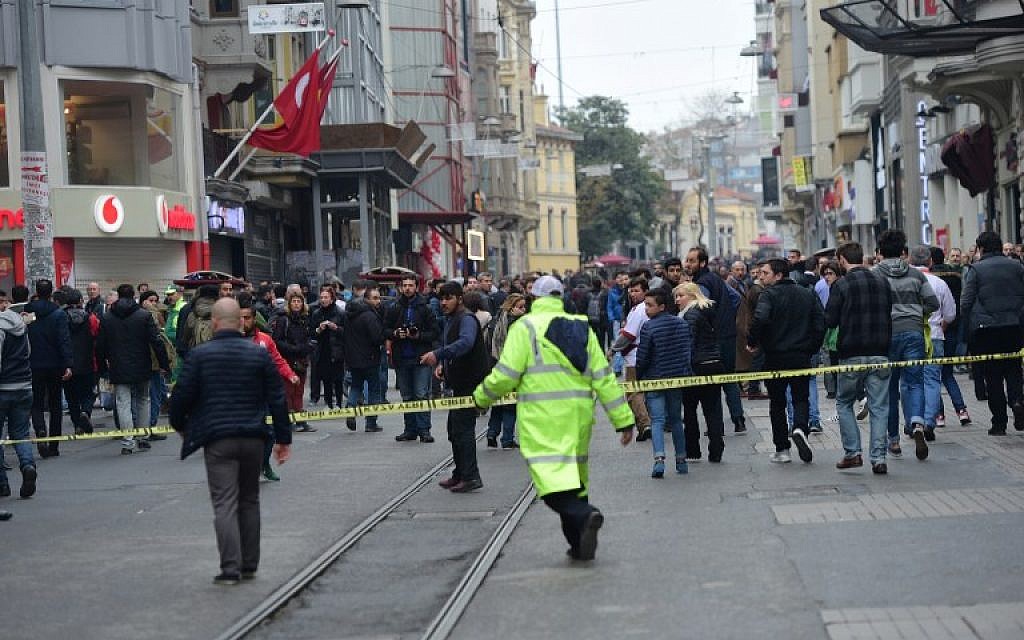 Suspect in Istanbul blast that killed 6 and injured 81 finally arrested as the interior ministry of Turkey said early Monday that a suspect was being held in connection with an explosion on Sunday.

According to state news agency Anadolu, Turkish Vice President Fuat Oktay said Sunday that the event was an act of terrorism.

“We consider it to be a terrorist act as a result of an attacker, whom we consider to be a woman, detonating the bomb,” Oktay told reporters Sunday.

“It is PKK/PYD terrorist organization according to our preliminary findings,” Soylu said in a press conference at the scene of Sunday’s attack on Istiklal Avenue, Istanbul.

Soylu did not say how investigators came to this conclusion or give any more details.

“A little while ago the person who left the bomb (was) taken under custody by teams of Istanbul Police Department. Before their arrest 21 more people were also taken under custody,” the minister said. “The face of terrorism is bitter, but we will continue this struggle to the end, whatever the cost is.”

Turkish Justice Minister Bekir Bozdag says that CCTV footage shows a woman sitting on a bench for more than 40 minutes. She then gets up one or two minutes before the bomb goes off and leaves a bag or plastic bag behind.

Bozdag said this in an interview with the privately owned news channel A Haber. He said that Turkish police think the woman is the suspect and are looking into her.

“There are two possibilities. Either that bag or plastic bag has a mechanism in it, it explodes on its own or someone detonates it from afar. All of these are currently under investigation.” he added.

“The name of the woman is unknown,” he said. “All the recordings and data about the woman are being analyzed.”

“We wish God’s mercy on those who lost their lives and a speedy recovery to the injured,” Yerlikaya tweeted. 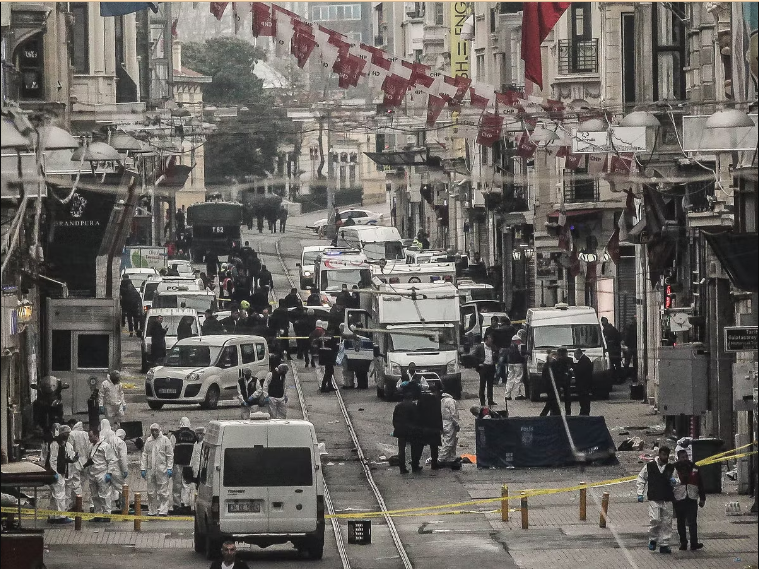 Several ambulances and rescue teams around the explosion area

The six people killed include Yusuf Meydan, a member of Turkey’s Ministry of Family and Social Services, and his daughter Ecrin, according to Derya Yanık, the minister of the agency.

Soylu, the interior minister, said Monday that 50 of the 81 people injured have been discharged from the hospital, with 31 people still being treated.

Turkey’s conflict with Kurdish separatist groups has spanned four decades and claimed tens of thousands of lives. The PKK has been designated a terrorist organization by Turkey, the United States, and the European Union.

In particular, the insincerity of our so-called allies who seem friendly to us, who either hide terrorists in their own country, or feeds terrorists in the areas they occupy and send them money from their own senates, is obvious. We will give them a response in the near future, to those who caused us this pain in Beyoglu Istiklal Street so they experience more and more pain.

What Appeared To Be The Devastation Of A War Zone

Tariq Keblaoui, a witness, said he was shopping on Istiklal Street when the explosion happened about 10 meters (32.8 feet) ahead of him.

Keblaoui, a journalist from Lebanon who was spending his last day of vacation in the city, said that people were scattering.

“Very shortly after, I could see how many injured were on the ground,” Keblaoui added. He says he saw dead bodies and victims who were seriously injured.

“There was a man in the store bleeding from his ears and his legs, and his friends were crying near him,” Keblaoui said.

Istiklal Street was packed with visitors when the blast happened Sunday afternoon, he said.

It went very quickly from a very peaceful Sunday with a very crowded street full of tourists to being what looked like the aftermath of a war zone.

- Keblaoui, a journalist from Lebanon

The United States “strongly condemns the act of violence that took place today in Istanbul,” White House Press Secretary Karine Jean-Pierre said Sunday. “Our thoughts are with those who were injured and our deepest condolences go to those who lost loved ones.”

Ukrainian President Volodymyr Zelensky tweeted of his “deep sadness” at the news of the blast. “I offer my condolences to the families of those who lost their lives and wish a speedy recovery to the injured,” Zelensky said. “The pain of the friendly Turkish people is our pain.”