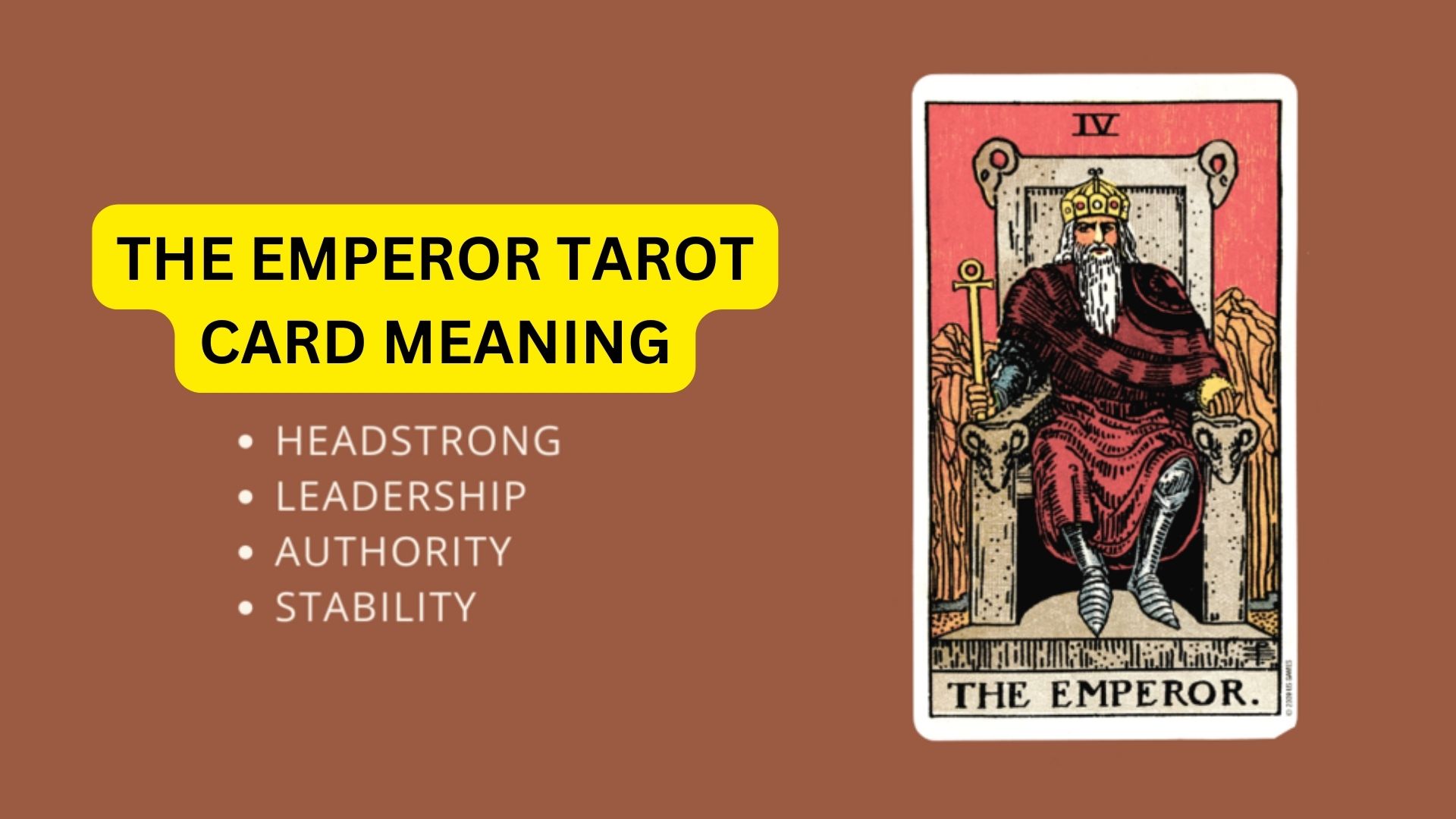 The fourth card in the Major Arcana is the Emperor, which symbolizes the tarot deck's traditional parental role. The emperor tarot card meaning represents the greatest degree of leadership and is a representation of power, success, and strength. It's a reliable sign that you'll advance in the organization.

But this is not a chance event. The Emperor wants you to be a strong, tenacious, brave, and authoritative leader. You'll become wealthy and a successful businessperson if you succeed in this. Your efforts will undoubtedly be acknowledged!

The Emperor is the Tarot deck's fatherly metaphor, much like how the Empress symbolizes the Mother archetype. His throne is built of stone and has four rams' heads on it to symbolize his connection to Aries and the planet Mars.

The orb in the Emperor's left hand represents the cosmos that he rules, while the ankh, the Egyptian deity of life, is resting in his right hand. The crimson hue of his clothing foreshadows his vigor and zest for life.

He looks like he is covered in armor below, which suggests that he is not affected by how people feel and can't get hurt. Along with his gold crown, the king's long, white beard shows how wise and experienced he is. This makes him a powerful person who deserves respect.

The large mountain range in front of him represents his strong foundation and his reluctance to make changes unless they are necessary. It will only take time and persistence to persuade him to open up to you, even if he may seem to be an immovable object.

Before getting into the meaning of the Emperor tarot card, both when it is upright and when it is backward, and how it relates to love, work, and life, think about the facts and maybe the most important words about this huge being.

The Emperor card, which is also the father archetype in the Tarot, denotes that you are assuming this fatherly role, providing for your family as well as watching over and defending people you care about. People who depend on you for strength and stability can refer to you as a "rock."

The Emperor is a powerful leader who similarly anticipates deference and obedience. Your personality is best suited to a leadership role since it allows you to direct or control people.

When governing, a leader must use a firm yet fair hand. You put together a team of individuals that share your excitement and devotion to accomplish your goal. Despite listening to others' advice, you prefer to come to your conclusion.

You don't back down from a fight, and you'll fight back to protect the people you care about. People will thank you for your efforts by demonstrating their gratitude and loyalty. Don't let others undervalue your position as a leader or influencer.

The Emperor represents a strictly organized organization. Applying big ideas or rules to a specific situation is how law and order are made and kept. Breaking a storm down into its parts and then formulating the necessary procedures to complete each one is the best way to bring it under control.

Be deliberate, strategic, and well-organized in how you do things, and stick to your plan the whole way through. The Emperor tarot card also represents one's capacity to learn from people from all across the world.

You are encouraged to analyze your relationship to authority, control, power, responsibility, and self-discipline and to make any required corrections by The Emperor Reversed. How much (or how little) of each of these characteristics are you now displaying in your life? Are they on your side or the opposition?

The Emperor has the potential to be despotic and dogmatic when his position is reversed. The card could allude to an abuse of power or overuse of it in your immediate surroundings. You can get it from your boss, a business partner, or even a father figure. And it's likely because of problems he had with his father as a child or a deep sense of insecurity.

Think about the role that power plays in your life and how you exercise it. How do you make others feel helpless by exploiting your position of control and power? Are you giving up control of your life to those in positions of power, like your father, instead of claiming your independence?

Find a technique to enable both you and other people to take the lead with courage and self-assurance. To share power fairly and productively, you don't have to take it from somebody or give it away.

Although some people might see you as a leader or an authority in your field, you are not yet prepared to fill such positions. You may want to stay out of the spotlight or lurk in the background if you're worried about being identified as the boss.

To reach a larger audience and have a greater impact and influence on the world, you can also publish a book or train others.

In The Emperor Reversed, you must occasionally defy authority. You're likely seeking a more flexible and adaptive work environment since you've had it with dominating bosses or hierarchical workplaces.

Your path to financial freedom and time management may lie in starting your own business. A job that allows you to be more inventive and adaptable in how you execute your responsibilities could be something else you should look for.

You're ready to stop working according to a set framework or method because you're done with it. When The Emperor Reversed appears in a Tarot reading, you should pay particular attention to your self-discipline and commitment to your goals.

Make sure you have a plan, a routine to support it, and the dedication to complete it if you aren't seeing any benefits. It might be necessary for you to be a little hard on yourself and do the task you'd rather avoid.

On the other hand, the upbeat, erect spirit of the Emperor might support your success. The Emperor Reversed could sometimes be a sign that an unfair arrangement is putting your long-term happiness at risk.

Your spouse or romantic partner has changed and is now possessive, controlling, and in charge of your relationship. It appears that you've been looking for a partner that would look out for you better and lay a solid basis for the future.

However, it looks like these characteristics have gone a bit too far, and as a result, it appears that a lot of your freedom and autonomy have also been taken away. This dynamic puts a strain on your relationship and makes it difficult for you to communicate effectively.

The Emperor Yes Or No Tarot Reading

The Emperor tarot card can help you take charge, come up with new ideas that work, and stay true to yourself. Because of this, the Emperor often means "yes" in a yes/no reading, especially when it comes to questions about money, career, employment, and relationships.

If this card appears, get ready to be in a committed relationship! In reading about love or relationships, the Emperor tarot card shows long-term activity, commitment, and stability. A close relationship with an elderly person who will show you love, care, and support is typically represented by the Emperor, who is renowned for his leadership and fatherly nature.

The Emperor card is a great indication that you're in a serious relationship since he stands for loyalty and lifelong commitment. It guarantees you a long-lasting, secure connection in this manner. Do you have trouble communicating with the people you care about? This card tells you that things will get better eventually if this is the case.

One of the most sought-after tarot cards for a financial or career reading is the Emperor. It suggests that you have a distinct idea of what you want to achieve and have put together a team to assist you in getting there.

It exhorts you to be powerful, diligent, bold, and in charge. You'll become wealthy and a successful businessperson if you succeed in this. Your efforts will lead to a promotion, a boost in income, or a new business opportunity.

Overextending oneself won't necessarily result in success. You must provide room for development! Take a hot bath or consider getting a massage to unwind. This will quickly provide you with a much-needed pick-me-up!

When you are ill or injured, this Emperor tarot card advises that you pay heed to your body's warnings. If you're feeling unwell, take a nap or call your doctor, and pay attention to your body's signals.

If you interpret a picture of the Emperor spiritually, it may imply that you've been placing too much importance on the material parts of your life. Make an effort to be mindful of your spiritual self, but also set aside time to reflect on your inner self.

Astrology And The Emperor Card

The paternal and protective forces of the zodiac are represented by the Emperor's tarot card. This character places a lot of emphasis on strength, bravery, and sticking to your guns. He is associated with the Aries zodiac sign, which stands for strength, aspiration, leadership, and self-assurance.

Mars, the planet of fighters, rules those born under the sign of Aries. The Emperor shows himself to be both a Stoic and a fighter in some decks. Mars and the sign of Aries are both connected to the fire element in astrology.

In tarot readings, the Emperor card is symbolically linked to the number four. In numerology, the number four stands for yet another point of equilibrium. Since 2+2 equals 4, it is now feasible to create anything substantial with just 2.

Four is a house in place of two, which was a plank of wood supported at both ends. The number four is a representation of a table. "Four" has a lot of power. Four is a symbol of satisfaction. Complacency also affects four. Life could get a little boring when all of your money is in the bank and all of your stuff is safe and secure.

What Does The Emperor Tarot Card Mean?

The fourth card in the Major Arcana deck, the Emperor card in the tarot, portrays the traditional parent role.

What Does The Emperor Tarot Symbolize?

What Is Emperor Card Reversed?

The Emperor's card turned around shows immaturity, lack of self-discipline, trusting others too easily, and a lack of power and control.

Why Do You Keep Getting The Emperor Tarot?

When the Emperor is upright, it normally means that you need to take charge of your destiny and that you shouldn't be afraid to seize or follow your true desires.

Please feel free to comment below. It gave the joy to respond to you. Our Tarot deck includes the Emperor card, which effectively and symbolically represents the Father Archetype. The Emperor is depicted sitting with an orb and an ankh in his hands, signifying his power to give life to his cosmos and domain as well as that of others.