Pulsating White Dwarfs - A Brief Analysis Of Their Properties

Instability strips between 11,000 and 12,500 K have been seen for single white dwarfs with a typical white dwarf mass of 0.6 solar mass.

In 1998, the first study of a pulsating white dwarf in the near binary system GW Lib was published.

This set up a new class of accreting white dwarfs.

Active mass transfer occurs from a late main sequence star to the white dwarf in cataclysmic variables, typically through an accretion disk if the white dwarf's magnetic field is less than a few million Gauss.

For stronger magnetic fields, accretion can happen right on the magnetic poles of the white dwarf.

Since the outburst heats the white dwarf, it moves out of its instability strip and stops pulsating.

This makes it a great place to study how the atmosphere and convective interior of white dwarfs respond to changes in temperature.

Photometric time-series investigations of a known dwarf nova have revealed the pulsation of some of these objects, but the majority were detected as new cataclysmic variables in the Sloan Digital Sky Survey (SDSS).

This survey's medium-resolution spectra of feeble systems with limited mass transfer and correspondingly dim accretion disks were an added bonus to the photometric colors already provided.

It was clear that a possible pulsator had broad Balmer absorption lines with a strong center emission, which is a classic sign of a pulsator.

In order to find pulsations, it is important to have proof that the white dwarf is contributing a lot to the light, which is shown by the broad absorption.

Since the accretion disk is responsible for the emission line cores, the pulsation amplitude is diminished, but the white dwarf's accretion status is made clear.

Follow-up time-series photometry of objects with these spectra led to the discovery of most of the new accreting pulsators.

Other sky surveys have also been effective at finding new dwarf novae, but in order to choose the best candidates for containing pulsating white dwarfs, they require subsequent quiet spectra of most objects.

This takes a lot of telescope time, and then high-speed photometry is needed to check for pulsations.

This is why no new accreting pulsars have been discovered in recent years.

What are white dwarfs? (Astronomy)

The Advantage Of The Hubble Space Telescope

To find the instability strip for the accreting pulsators, you need to look at ultraviolet spectra with a sensitive big telescope.

The emission from the accretion disk fills up the optical spectrum, so the spectral energy distribution or the Balmer absorption lines can't be used to figure out what the real temperature is.

Only the Hubble Space Telescope (HST) equipped with a FUV detector like STIS or COS is able to fit white dwarf models to both the continuum and the Si, N, absorption lines along with Lyα.

An estimate of the disk's usual 10% contribution to the total UV light can be derived from the fit to the Lyα core, making it an extremely crucial piece of information.

Because the ratio of the FUV to optical amplitudes is on the order of 6-10, pulsations can still be seen in time-tag mode FUV spectra, despite the short and interrupted sequence of HST orbits.

Helium in the white dwarf's atmosphere from ongoing mass transfer from the secondary and the larger white dwarf masses in CVs can explain these traits.

Still, it is strange because not all dwarf novae in the temperature range of the strip have pulsating white dwarfs.

More evidence shows that at least six accreting pulsators that have already been found can suddenly stop pulsating even though they have never had an outburst.

EQ Lyn has the most information and shows many changes between pulsation and not pulsation.

There are currently five objects observed with HST and optical measurements before and after an outburst, allowing for the discovery of temperature and pulsation changes.

Two of these (EQ Lyn and V455) cooled back to quiescence from their pre-outburst periods within a few years.

However, V455 was monitored while cooling, but EQ Lyn was not.

Once EZ Lyn had its explosion, only then did it begin to show any pulsations.

Only GW Lib and V386 Ser have been watched for long periods of time with UV and optical data after their outbursts in order to learn more about how the pulsation modes change.

Since its dwarf nova outburst in 2007, GALEX, HST, and ground coverage have been keeping tabs on GW Lib, and the results have been unexpected.

From 2007-2009, GALEX photometry revealed a decline in UV fluxes and the emergence of a new long-period fluctuation at 4 hours in the UV.

Since there were no UV spectra and most of the light was coming from the accretion disk at this time, it was not possible to figure out how hot a white dwarf was.

However, temperature and time-resolved UV light curves had to wait for HST coverage, while ground coverage continued to display an intermittent 19-minute period.

The HST STIS spectra taken five years before the outburst showed that GW Lib had cooled to a quiescent temperature of 15,000 K.

Three years after the outburst, the first of five series of HST COS observations began.

These observations lasted for another seven years.

Beginning in 2011, typical cooling to 16,000 K commenced, but the subsequent three sets of spectra revealed the same elevated temperature near 17,000 K on average.

The second component's temperature reached up to 25,000 K during some of the observations when it was fitted with a 2-component model containing a 16,000 white dwarf.

Over the course of those seven years, the combined optical and UV coverage exhibited a wide variety of times, from those significantly different from quiescence to those as short as 19 minutes and as long as four hours.

It wasn't clear if these modes were only caused by pulsations or if they were caused by both disks and pulsations.

To tell these times apart, UV and optical data had to be collected at the same time over a large time span.

Warner and Woudt found pulsations after they found the object in SDSS and thought it was a catastrophic variable.

In 2005, a HST SBC spectrum indicated that the white dwarf was resting at a temperature of around 13,500 K.

The HST COS spectra were taken in August 2019 and February 2020. This is the first time that an outburst of a dwarf nova has been found in this way.

So, the first phase of cooling was typical, just like GW Lib claims.

Seven months after the outburst, the combined UV and optical light curves indicated a pulsation at 104 seconds, then again at 175 seconds and 187 seconds thirteen months later.

The heating and cooling patterns observed are consistent with theoretical predictions.

More optical data collected over the next few years will show if this trend continues or if any of the 19-minute and 4-hour modes seen in GW Lib appear.

The Advantages Of The Long-Time Series

Extended campaigns were tried for EQ Lyn, V386 Ser, and GW Lib even though most of the objects were too faint for WET.

Unfortunately, no new information was given because EQ Lyn stopped pulsating and went back to a superhump period of about 85 minutes when it was observed by 5 observatories over 11 nights in January and February 2011.

The 11-night campaign on V386 Ser, which was carried out in May 2007 using seven observatories, was more successful since it allowed for the accurate determination of the object's 609 seconds pulsation mode and indicated the existence of a triplet structure.

The triplet's uniform spacing resulted in a rotation time of 4.8 days, which is exceptionally long compared to the white dwarfs' typical rotation lengths in dwarf novae, which are on the order of minutes.

A match to the HST absorption lines revealed that the accreting pulsator in GW Lib rotates over a period of 209 seconds.

The Next Generation Transit Survey (NGTS) then watched GW Lib on 148 nights over 7.5 months in 2017. 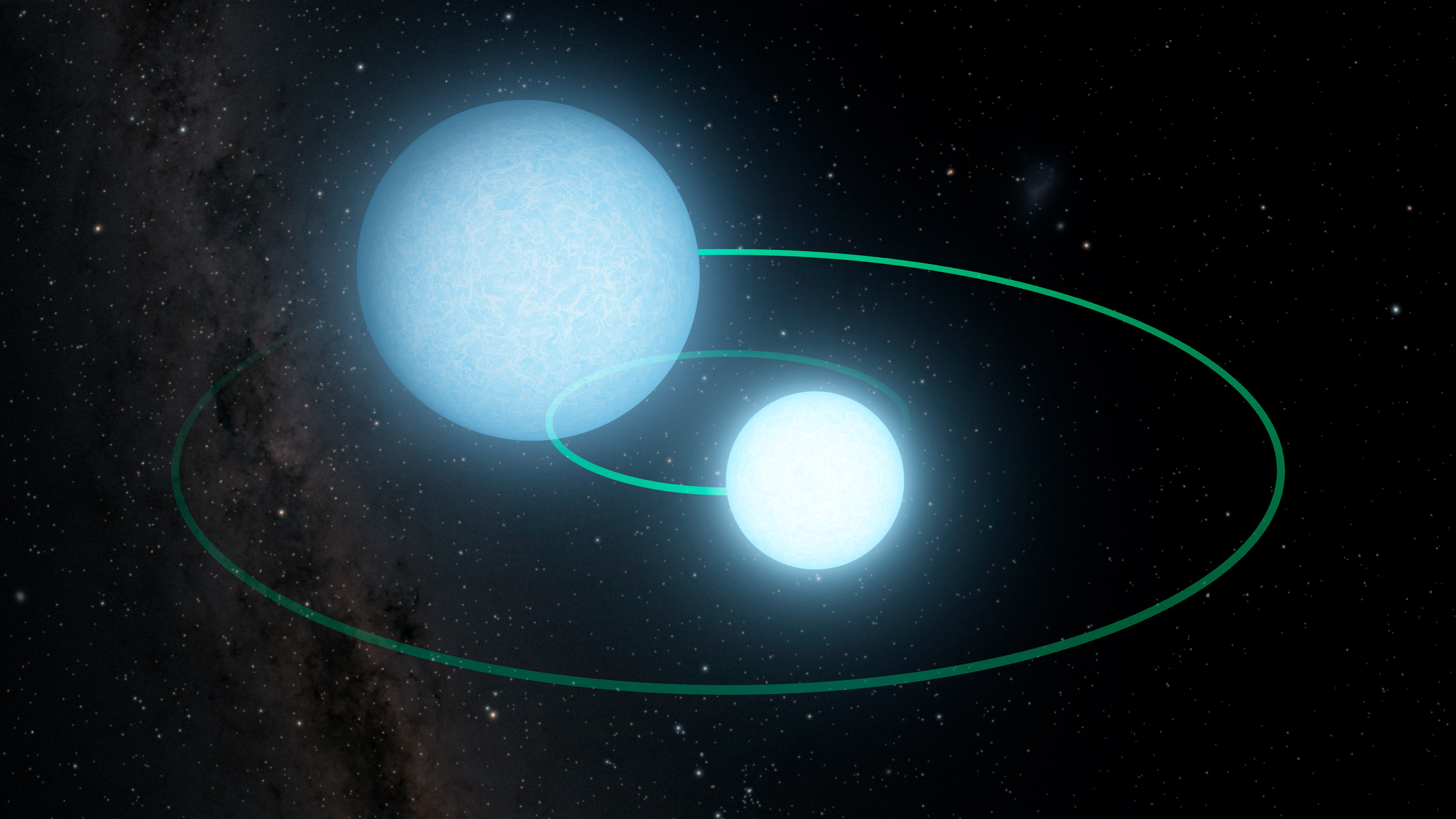 The lengthier durations of 83 minutes and 2 to 4 hours changed over a period of about a week, whereas the 20 minutes period persisted throughout.

There was a push to move one of the K2 program fields slightly to cover the bright accreting pulsating white dwarf in GW Lib during HST observations in 2017.

This was because the Kepler satellite showed that pulsating white dwarfs benefit from high-resolution data that is collected continuously over months.

As a result, the mode transitions from minute to hour timescales were much more thoroughly understood.

The short period of 275 seconds could only be seen in the UV during the highest point of the 4 hours variation.

This shows that the white dwarf is the source of both of these.

The 90-minute period was always there, just like in the NGTS data, and K2 and HST observations made at the same time showed that the 4-hour period was clear in both UV and optical.

Unfortunately, HST didn't get any more proposals for these two targets, so it's impossible to know what the final UV temperature sequence will be.

However, ground-based campaigns can still be used to gather some pulsation data.

What Happens When White Dwarfs Collide?

When white dwarfs collide, they usually cause massive star explosions known as supernovae.

What Causes A White Dwarf To Explode?

Acquiring mass from a companion star will cause a white dwarf to grow until it approaches the Chandrasekhar limit, which is roughly 1.4 solar masses.

This triggers a runaway fusion process that results in an enormous SNe Ia explosion.

What If A Neutron Star And A White Dwarf Collided?

The research team was sad to find that a collision between a neutron star and a white dwarf would cause an explosion that would create calcium-rich material and the energy needed to drive the low luminosity of calcium-rich transients.

Can A White Dwarf Turn Into A Supernova?

A carbon-oxygen white dwarf is one of the stars that takes material from its neighboring star.

A supernova is produced when a star explodes due to an excess of spherical material.

In addition to optical spectra and quick time-series studies from the ground and space, they have provided insight into the rare class of accreting, pulsing white dwarfs.

Long-term monitoring from space and the ground is needed to figure out the mode changes that happen at the base of the convection zone as the white dwarf is heated and cooled after an outburst.

These changes can be seen in the spectra of these objects, which show Balmer lines with broad absorption on either side of emission cores.

Their temperatures, which can only be found out by looking at their UV spectra, have a wider range than those of single white dwarfs that pulse.

But the window of opportunity to use these objects to learn about how accretion changes the inside of a white dwarf is closing since most modern sky surveys are mostly photometric and UV spectra of dim sources won't be easy to get in the near future.