Zelensky Accuses Russia Of War Crimes As He Visits Kherson 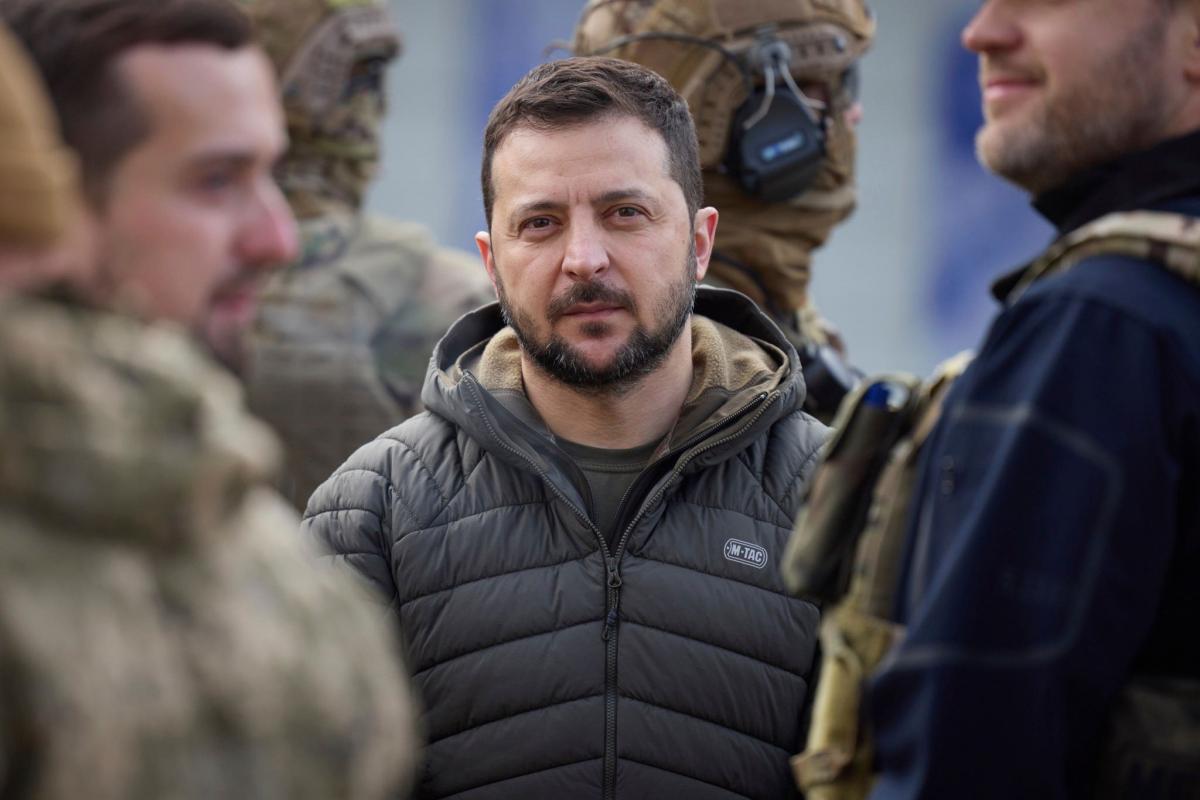 Zelensky accuses Russia of war crimes as he visits Kherson. Ukraine's president, Volodymyr Zelenksy, made an unannounced trip to Kherson to show support for the people who live there. The city had just been taken back from Russian forces, and investigators have already found signs that war crimes may have been committed there while they were in charge for months.

In his nightly address on Sunday, Zelensky said that officials had found proof of more than 400 war crimes. Zelensky said that when Russian forces left quickly, they left behind a path of destruction and dead bodies. This is similar to what Ukrainian officials found in April in Bucha, a suburb of Kyiv, and Borodianka, a city east of Kyiv.

Zelensky said that the situation in the Kherson area is still very dangerous.

Just a few hours later, Zelensky went to the regional capital with the same name to talk to local leaders. He told the reporters that it was important to go to Kherson and pointed out that Ukrainian soldiers and journalists were also taking risks by being there.

I think it is necessary to be here and talk about Kherson residents, to support people. To make them feel that we are not only talking about it, but we are really returning, really raising our flag.

On Wednesday, Russia's military told its troops to leave Kherson. Moscow said on Friday that it had left the west bank of the strategically important Dnipro River, giving up large areas of land that it had occupied since the beginning of the war. This means that the Ukrainians now control Kherson city and the areas around it.

On Saturday, when Ukrainian troops entered the city, happy people cheered for them and asked for autographs. People from Kherson gathered in the main square to sing the national anthem and shout "Slava Ukrayini!" " is a patriotic way to say "glory to Ukraine." Zelensky said there were still between 70,000 and 80,000 people living in Kherson.

Putin's war in Ukraine has taken a big hit from the retreat. Since the invasion in February, Russian forces had only taken over Kherson, the regional capital of Ukraine. However, it was one of the few places where people were brave enough to protest against the Kremlin.

Kherson is also one of the four parts of Ukraine that Russia tried to take over in a way that was against international law. Less than five weeks ago, Vladimir Putin, the president of Russia, said that the people who live in these areas would always be Russian citizens.

Dmitry Peskov, a spokesman for the Kremlin, said, "No comment" when asked about Zelensky's visit. "This is Russian territory." 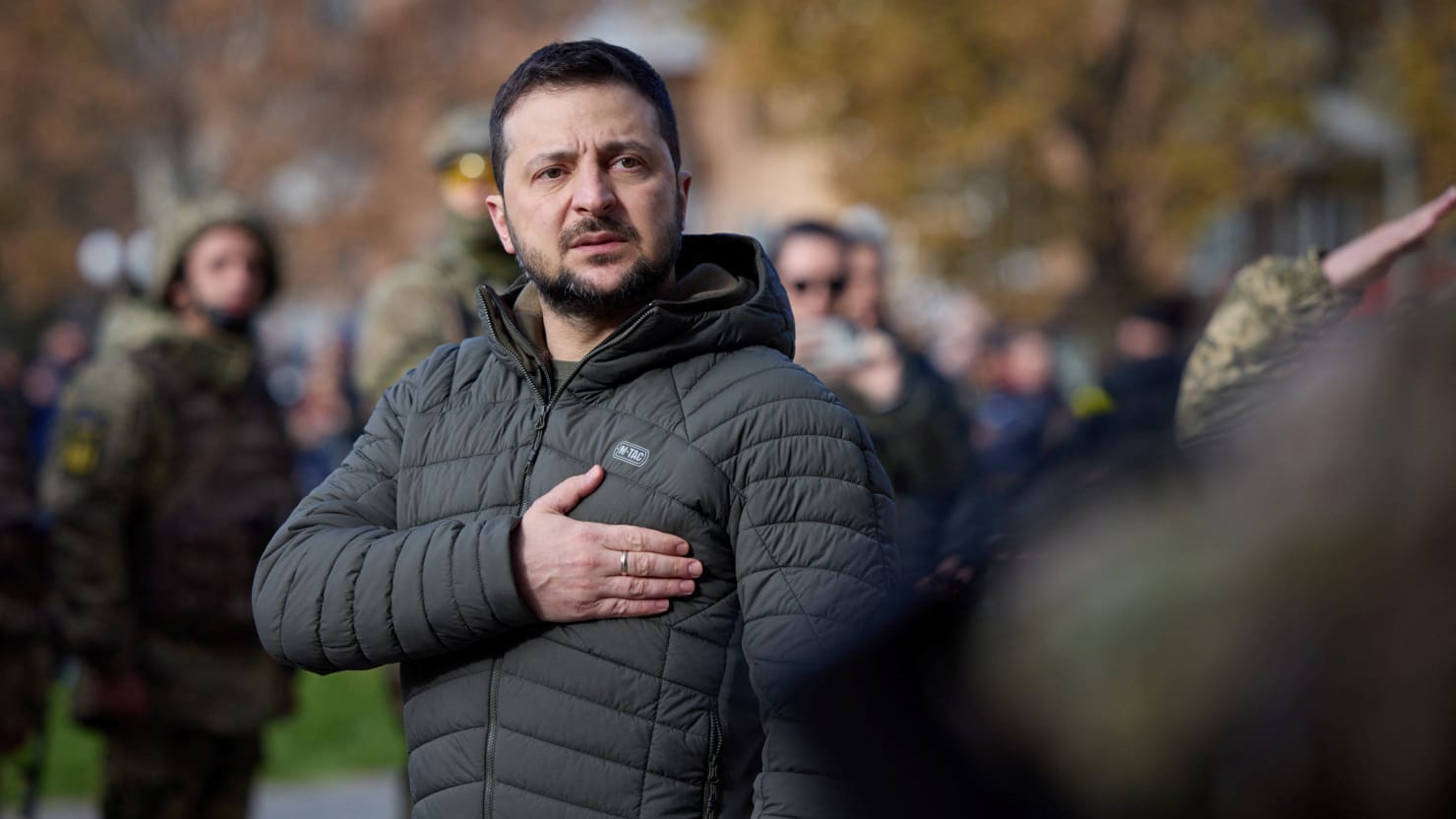 The President of Ukraine Volodymyr Zelenksy saluting the people of Ukraine

Even though Russia has pulled out of the city, Kherson is now one of the places where the war is starting.

Now, Russian troops are just a few kilometers away, on the other side of the Dnieper River. Monday, the Ukrainian military said that Russian forces were doing more aerial reconnaissance of Kherson, which could mean that there will be more airstrikes in the future.

On Saturday, Ukrainian police said that mines and other explosives left behind by the Russian military were the most important problem right now.

Zelensky said on Sunday that during de-mining operations, one sapper was killed and four others were hurt. A top Ukrainian official said Sunday that a mine accident also hurt a family of four, including a child of 11 years old.

It's still hard to live in the city. People don't have power or internet, and food and water are still hard to come by. A volunteer official said that the first aid convoys started coming into the city on Monday.

Important nearby infrastructure, like a dam, is still broken and needs to be fixed before it can be used again.

Yaroslav Yanushevych, who is in charge of the military administration for the Kherson region and is Ukraine's top official in the area, said that all four power lines to the city had been destroyed.

“We are working on solving this problem day and night,” Yanushevych told reporters while appearing beside Zelensky on Monday. “The power will be restored in the near future.”

Kherson is just one place in Ukraine where there isn't enough electricity because of the war. Since the end of summer, Russian forces have been going after Ukraine's energy infrastructure, making it hard for Kyiv to keep the lights on and the heat on as winter approaches. Zelensky called these kinds of attacks "energy terrorism."

According to NATO chief Jens Stoltenberg,

The coming months will be difficult. Putin’s aim is to leave Ukraine cold and dark this winter so we must stay the course. We should not make the mistake of underestimating Russia.